I always remember one of ex-colleague, who has two sons told us whenever she board the plan, she distributes some candies/chocolate to people sitting around them, to “shut them up” (not the nice way to say, but it’s true) when later on kids start being naughty or making scenes.  What a brilliant idea! It made me laugh at the time, I didn’t understand how much hassle that flying with babies or toddlers would entail.

Now I know! Flying with baby/toddler, the idea itself makes me tremble. But we had to do it. With some trials and errors, here are some tips to help you and everybody remain sane during the whole flight with our lovely babies/toddlers, to prevent or fix the situation when they show their ‘evil’ side.

1.Infant seat or not
In Asia, a lot of flights you can’t book infant seat online, but to call in. In Europe, big companies will immediately offer you the infant seat and you could not choose other seats or change online, but go to the counter or exchange on the plane with people around you.  I personally like the infant seat as they give you bigger legging room & it’s first row — at least your baby won’t bother passengers in front of you. If your baby is under 10 kg and you are lucky that she/he could sleep peacefully in a small area, you can use the bassinet as well.

2.Remain their healthy physical condition
Keep your baby/toddler hydrated and pleasantly full with enough water and food. The most uncomfortable part of the flight are ascent and descent. The pressure in the cabin will make your ears pop. I used to dive a lot,  the technique help clear my ears. However young children don’t know how to do that, so if your baby still breastfeeding, feed her/him during those time.  Or give them pacifiers, the sucking actions will ease the discomfort. If they grow out of these, give them something to drink can help too.

3. Let them sleep as much as they can
Try to wear them out before the flight, with the great hope that they can be in the dreamland most of the time. Zoey (when 15 months old) used to sleep the whole time on the plane from Athens to Malta, but that’s a midnight flight and the duration only lasted for 1.5 hours. During long flight, try to sing to them and give them milk – if sleep is not the marathon type, a few broken ones will make parents’ life easier too.

4. Keep them entertained & busy during awake time
Take some new toys or food with you and give to the little ones from time to time as the surprise. They might spend more attention on playing the new toys than already familiar ones. We took a few stuffed animals with us during a long flight from Asia to Europe (12 months old), Zoey just abandoned them straightaway. Getting creative with materials on the plane will be much helpful, as they are more interested in those – making some origami with airsickness bag; telling some stories from the on-flight magazines,  showing them what’s happening outside the plane.  They would like to walk in the cabin from time to time (or all the time as toddlers), do that with the caution,it’s not bad to let them stretch legs and get a bit micro exercises. 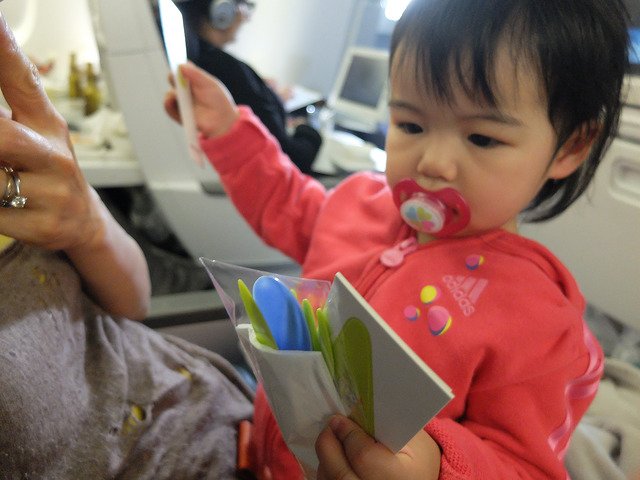 5. Be loving and relaxed but firm
During the flight, you as parents will give your child 100% attention. Some kids would take advantage of that and lose temper sometimes.  Give them extra space to be a bit naughty, but when they are pushing the limit, you need to step out and let them know you are the boss. Otherwise, the only person who cries will be you.

Enjoy your flight with your angel like babies/toddlers, boy voyage!