So this is our second time going to Busan, and the first time I took the little one for the purpose of Visa run since her dad already gone back to Europe. 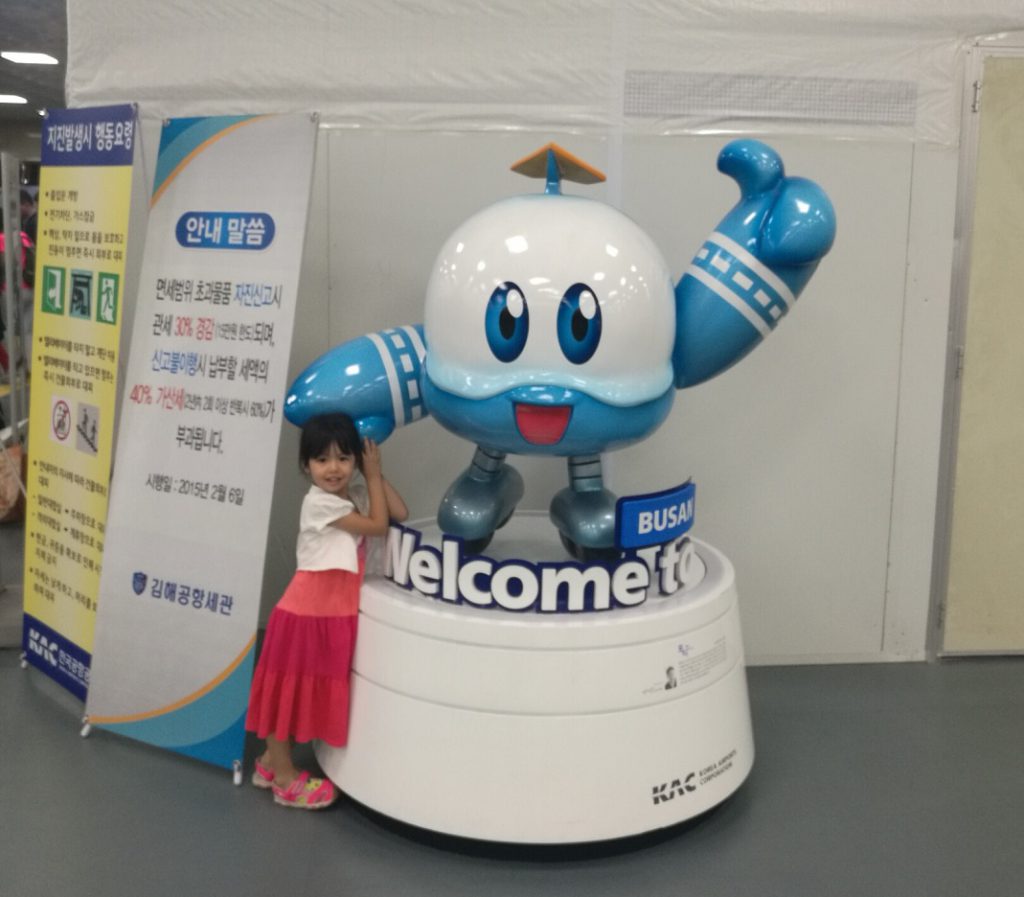 Since it was the visa run trip, I only planned for 1 night two days and I can call it a success. I picked up Zoey from the kintergarden around the mid-afternon then headed to the airport. Flight with Asiana airline was alright, the girl got a small sticker gift and a good meal was served. Although we just missed the airport shuttle bus to hotel, the taxi fare wasn’t too expensive and we arrived at hotel in much better condition. Two young men were at the check-in counter, they spoke alright English and actually good Mandarin as they saw me having a Chinese face. lol. They told me they are learning Mandarin Chinese since China is a big market for them. True, true.

The GNB hotel is not fancy, but has everything. We had a good night sleep, then the next morning, we stored our luggage with the front deck then headed out for half day adventure.

I got the tourist map and had a few points to visit in my head, First things first, breakfast. We aimed to walk to Yongdusan Park, half way found the café “Paris baguette” and filled our tummy. Then after a few minutes, here was the park. Not big, but greenery, the observatory tower was in renovation, so we skipped that. 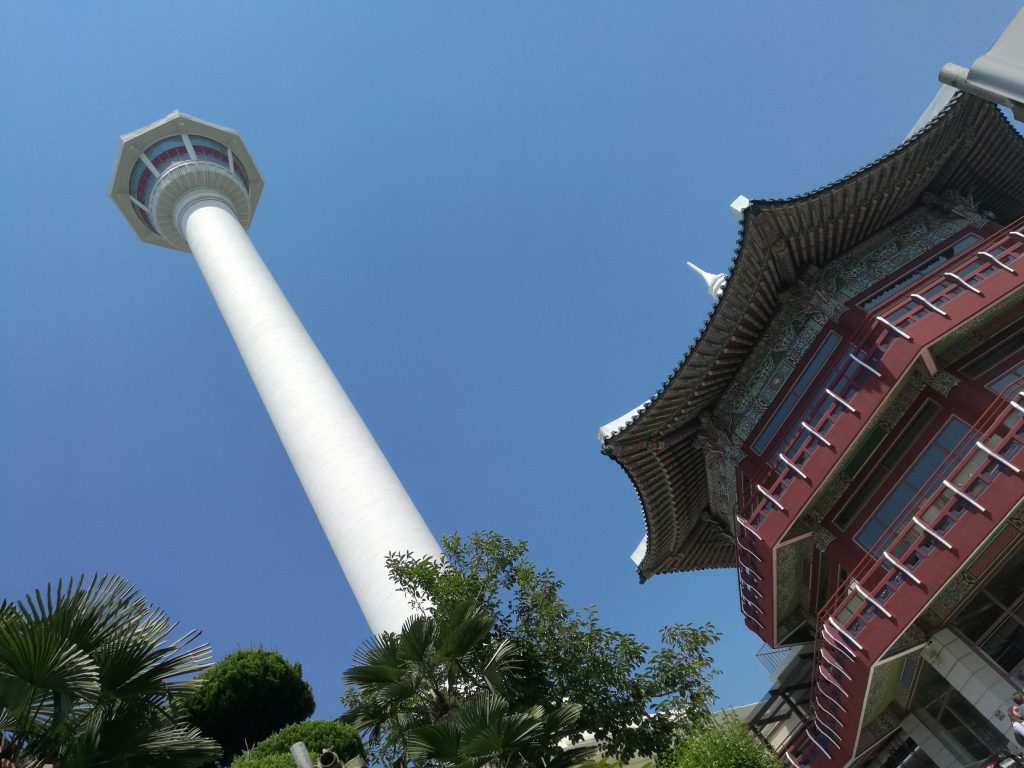 After a bit orientation lost, we found the right way heading down to BIFE square (Busan International Film Festival). 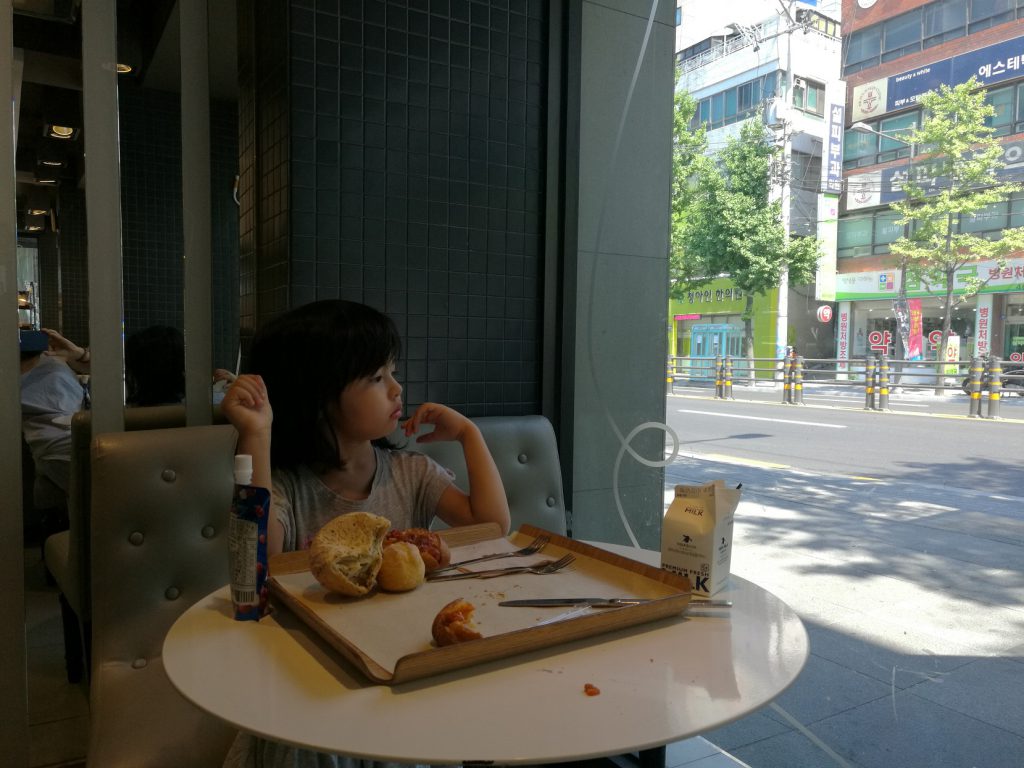 After walking down the Gwangbok-ro Shpping Street, Zoey walked in one shop and picked up a hat herself, oh well, I hope that her shopping instinct won’t be opened up this early. 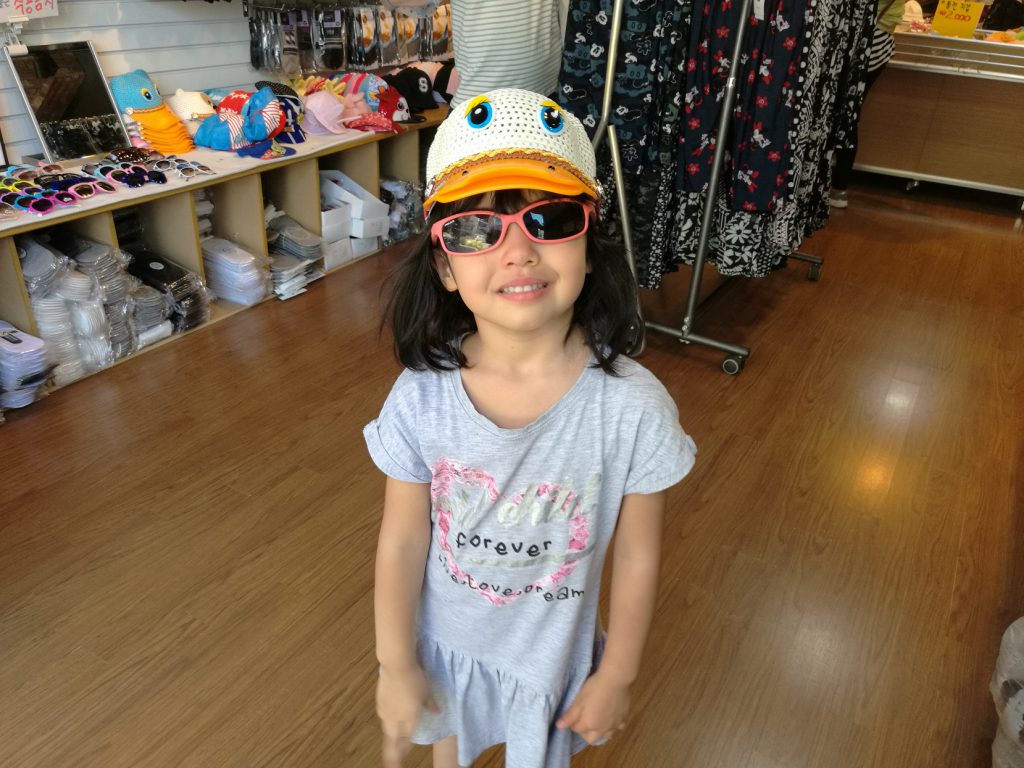 I was thinking that BIFE was a bigger space that look a bit similar to LA, the little one started saying ‘tired’, etc, so I promised ice cream after checking out BIFE square. Then we walked to the Jagalchi Market, appreciating some nice seafood display, I suspected the little corner that we passed a moment a go was BIFE square (of course there are some theaters around, but we didn’t have time to see anyting, nor with the little daughter). So we walked back, it was. I took a photo of the future movie star, then we found an ice cream shop & fulfilled my promise. 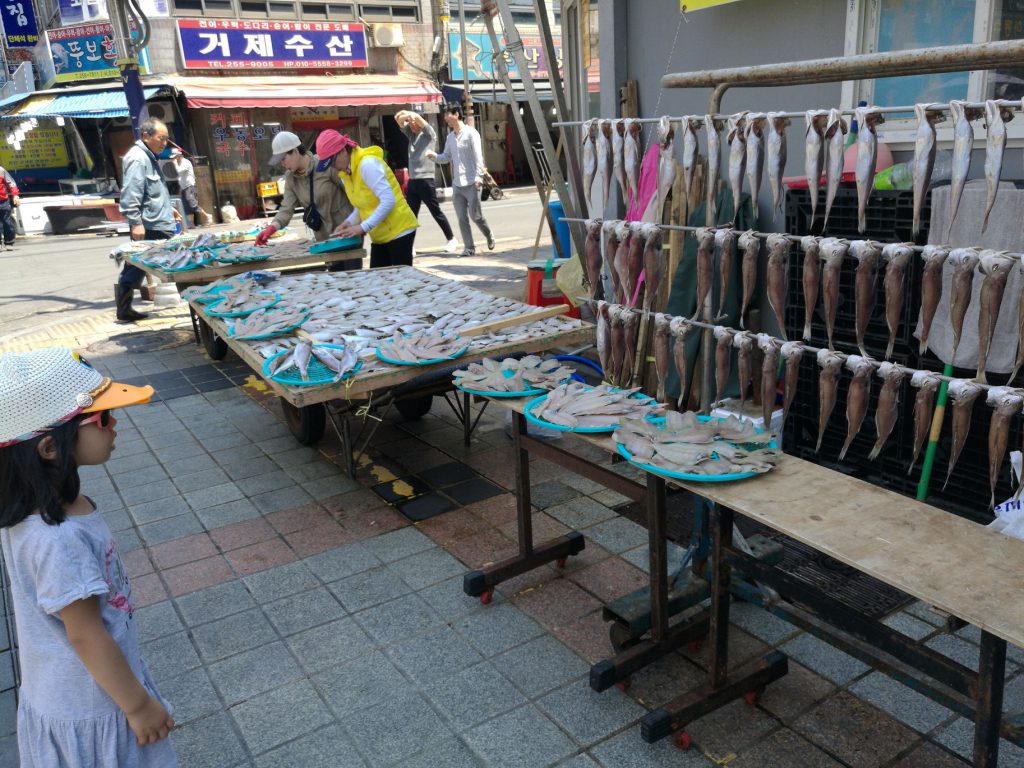 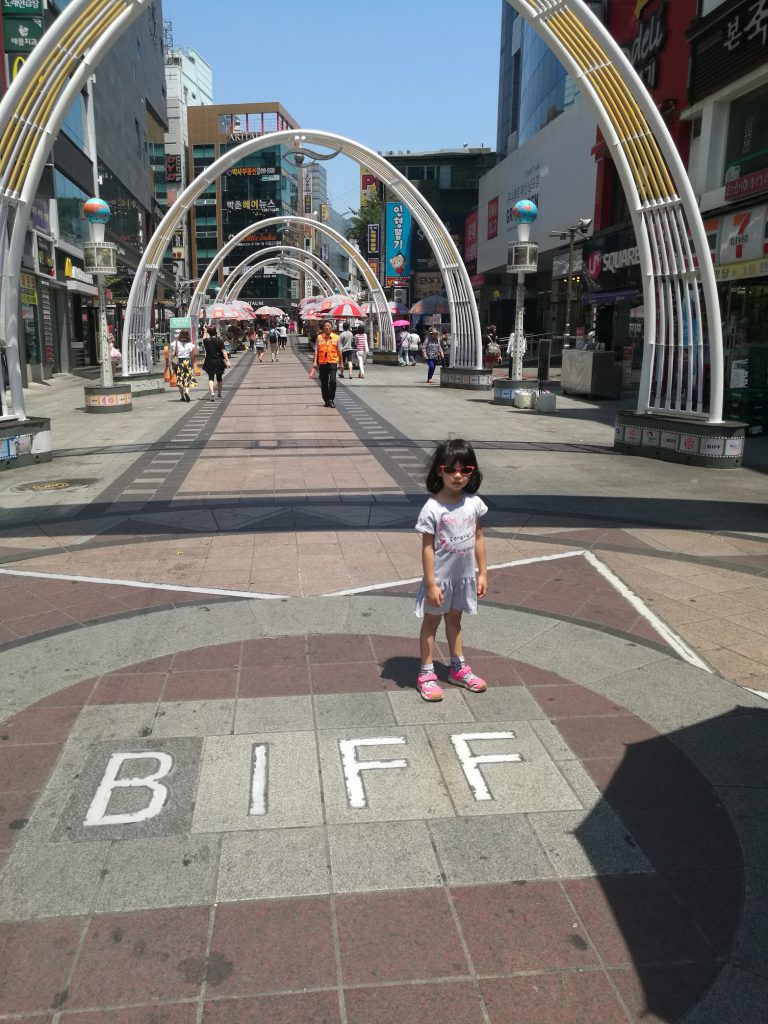 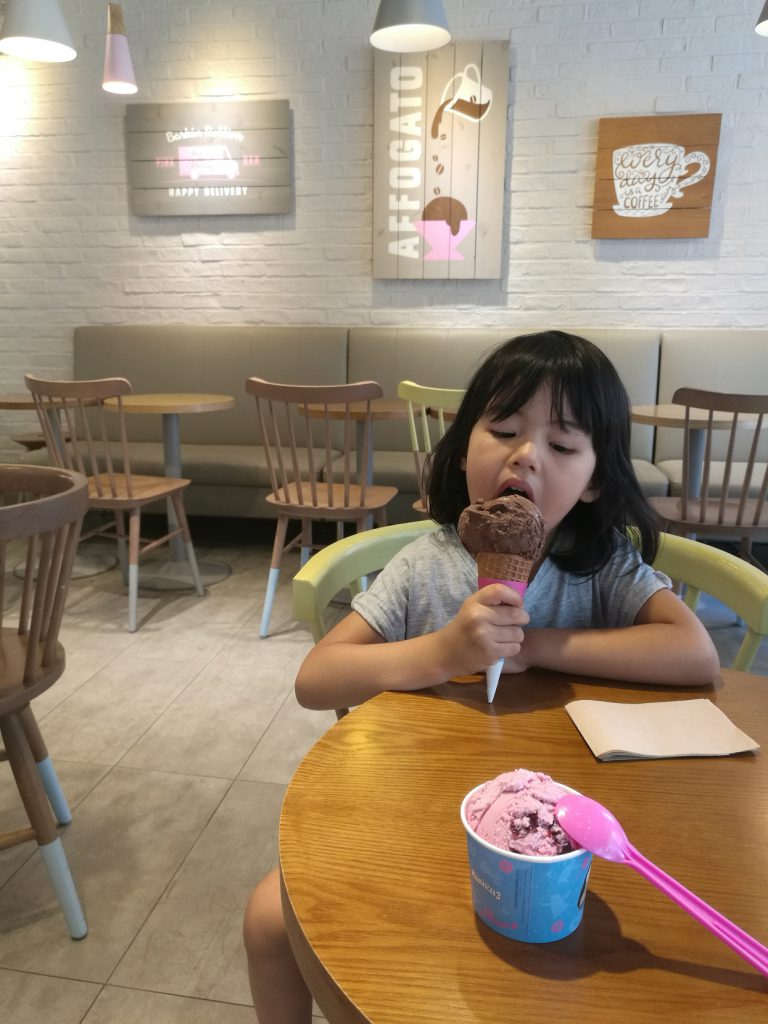 Due to last time Busan trip, we missed the plane when not awaring the one-hour time difference with Beijing. So this time I left enough time to not being sorry again. We took a cab and got to the airport almost 2 hours before flight & settled in.

Our 2nd time in Busan was more around the city, not like last time around the beach. I think both are fine. Given more time, I would suggest beach area, more relaxing, more beach activities, also enough to shop if you want.